Please come to my party.

Thing is, I really want you to come. And I live like a block and a half from you, pretty sure, so it really wouldn’t be that much work. Just pop in for like 10 minutes – eat some scones or something, have a glass of wine, and skedaddle if you want. Or stay, whatever. My parties are real fun.

You can even bring your lady – she seems way nice.

Here are the details:

I know you don't know me.

It’s maybe a little weird to be asked to a party by a stranger. I know that.

But – it’s possible you won’t remember this – we did meet one time at that coffee shop on Irving Place. You and me were the only people in line… They were taking a long time to fix your drink, so you turned and said hi to me and asked if I worked from home.

Point is, I’m not a complete stranger. In fact, I’d say, statistically, I’ve spent more time with you than about 99% of the people in the world.

And when you think about it, how many parties have you been to in your life where you don’t actually know the host. Probably like a million.

Come to mine. Come on.

p.s. A quick google search will tell you most anything you need to know about me, in case you’re curious. My last name is Claus.

And I'm not a weirdo

I’m not one of those people who are obsessed with famous people. Honestly, I don’t even know that much about you. I listen to your podcast sometimes. And I watched 30 Rock, who didn’t. But beyond that, all I really know is you’re nice to strangers in coffee shops, and you seem like you’d be a delightful party guest.

I’m not a weirdo. I’m not. I work with kids and I appreciate my parents and people trust me to watch their pets when they go out of town.

Look – here’s what my friend Kraig says about me:

I hope this puts your mind at ease. And if you’re thinking “This girl made a whole website to get me to come to a party – she must be a weirdo,” consider this: if you were my friend, I would have sent you an email like the rest of the people I know. But I don’t have your email address, so this is really my only option. (If you would like to send it to me, you can do so using the form below.)

Also it’s pretty easy to build a website these days.

See you soon, I hope.

Thank you! Your submission has been received!
Oops! Something went wrong while submitting the form.

You can bring your kids

Just wanted you to know that this is not one of those parties where everyone gets wasted or naked or starts cuddling indiscriminately. My boss is probably going to bring his kids. They’re older than yours, but still, you get my point.

No one will try to steal them or take pictures of them or do anything weird because you are a celebrity. I will also put up the baby gate so they don’t fall down the stairs.

Come to my party.

I know you're in Paris right now.

...and that you’re doing very important, admirable things for the environment and stuff. Do that, for sure. It’s a big deal.

What’s cool is it looks like the conference ends on the 11th, which JUST HAPPENS TO BE THE SAME DAY AS MY PARTY(!!!).

Someone just told me you moved out of New York

See, Alec Baldwin, this just proves I’m not a crazy stalker person – I didn’t even know that. Thing is, the only thing I’m finding online is from 2014, so I’m choosing not to believe it’s true. And even if it is, I’m guessing you can afford to fly in. I have an extra bedroom in case you guys need a place to crash.

p.s. I’m really sorry New York was so mean to you. Sometimes people are real assholes.

p.p.s. I also just found out you had a stalker. Sorry to bring that up. I promise I won’t ask you about it at the party.

My friend Jeremy just sent me a gif of you licking an ear of corn. This might be the worst thing that’s ever happened to my eyes.

‍Please note that there will be NO CORN at my party. If you bring corn, I will turn you away, even though you are Alec Baldwin. This is not a joke, I’m very, very serious.

‍That said, if you’d like to bring something else, please feel free. I really like cheese. Some olives might be nice – but not the black ones, I hate those. Also, I’m not sure I bought enough napkins, so if you could stop by Duane Reade and grab some, that would be great.

We’re gonna be setting up at around 6, if you want to come early and help.

Did you see the flyers I posted around Gramercy? 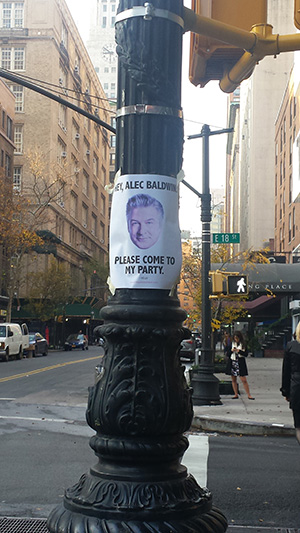 I was only able to hang a few cuz my crappy off-brand masking tape kept breaking and I was running late for a meeting.

I’m thinking about hanging some on the Upper West Side after I get off work tonight because Jennifer said you shop at Zabar’s. That doesn’t sound right though – who buys groceries on the Upper West Side unless they live there, right? I’ll see if I can make it up there – I’ve got a lot of other stuff to do, planning this party and all. NOT THAT YOU’RE NOT IMPORTANT, ALEC BALDWIN, YOU TOTALLY ARE.

By the way, I tried to send you my address via Twitter but it appears you don’t accept private messages unless you’re following me or something. Sooooo let me know the best way to get you the deets.

Anyways I hope you see the signs. I worked really hard on them.

I bought this really great dress.

That’s not a tactic to get you to come – I’m sure you don’t care what I’ll be wearing. I just wanted to let you know I take my parties very seriously – enough to spend SIXTY BUCKS on a dress. That doesn’t sound like a lot, but I work for a nonprofit, so it may as well be a million. PLUS I HAD TO PAY FOR SHIPPING, ALEC BALDWIN. SHIPPING.

Disclaimer: I only ordered the dress a few days ago and it hasn’t arrived yet – if it doesn’t get here in time, I’ll probably just wear jeans and this black top I have, blah.

You can wear whatever you want. It’s easier for men anyways (fuckers). If Hilaria’s wondering, I think most people will be going “festive casual.”

I’m sure you’ll both look great.*

*But obviously not better than me. I’m very cute.

p.s. You should know that this is NOT a shoes-off home. EVERYONE MUST KEEP THEIR SHOES ON AT MY PARTY, I MEAN IT. Sorry if that weirds you out b/c your baby will be crawling around on the floor with his little hands. I don’t have kids, so my empathy for that sort of thing is pretty low.

Are you so excited?! I was looking at your instagram this morning and it appears that you guys are in Spain, but I’m sure that’s just a pre-scheduled posting to throw off the paparazzi. Very smart, sir.

So since this is your first Shenanigans party, I wanted to give you a heads up about some of the ground rules for tonight:

Okay, I’ve got a crapton of stuff to do, and I’m sure you need to start getting ready.

Sorry it’s taken me a few days to write this. I’m just recovering from that massive cleanup job since you weren’t there to help. Luckily Harry and Ciara lent a hand (you totally owe them, btw).

You also owe Gus for having to hold up this mask of your face all night so people could take pictures with you. His right arm was so tired, you have no idea. 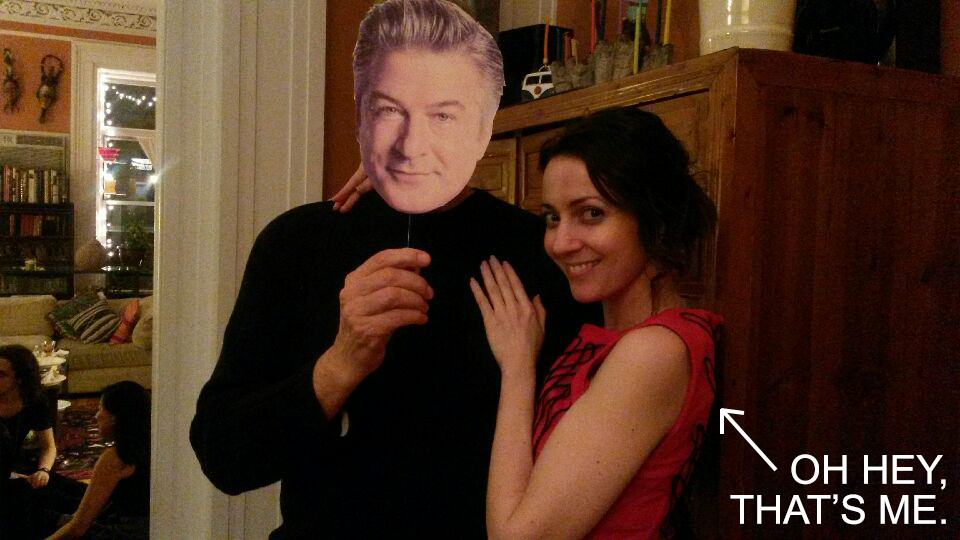 Anyways, I was thinking that since you weren’t able to make it, you might want to grab dinner or something some other time… Thing is, I’m leaving New York in February to do some more of this stuff, so we should get something on the calendar soon. Or you could meet up with me in Hong Kong or something. I’m down for whatever.

Also if you’d like to fund my travels, I would not argue (it would only be fair, since you missed my party, let’s be honest). YOU CAN DONATE HERE. <– <– <–

Okay cool, talk to you soon…

p.s. My dress was fucking amazing.

JK, you missed it.